Peripheral artery occlusive disease (PAOD) is more common in patients with diabetes, especially uncontrolled diabetes. PAOD is a major contributing factor in more than half of patients with a diabetic foot ulcer. Peripheral arterial disease (PAD) is an arterial occlusive disease in either the aorto-iliac segment or below the level of the inguinal ligament, due to atherosclerosis. The reduction in blood flow to the foot due to blockages is contributing towards formation of an ulcer or gangrene. 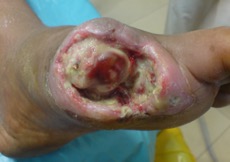 PAOD in diabetes is a condition predominantly of the infra-inguinal vasculature and can be at a macroscopic or at a microscopic level. Presence of PAOD among patients with diabetic foot ulcers is associated with worse outcomes, such as poor healing of foot ulcers, development of gangrene, toe / foot / leg amputations, increased cardiovascular events and higher death rates.

The diagnosis of PAOD is difficult in patients with diabetes, as they usually lack typical symptoms, such as leg pain, calf pain on walking (claudication) or rest pain, even in the presence of severe ulcers, gangrene or tissue loss. The performance of the diagnostic tests may be affected by the presence of medial arterial calcifications, foot infection, foot edema and peripheral neuropathy in diabetic patients.

Up to 50% of the patients with diabetes and a foot ulcer have PAOD, and these patients have been reported to be at increased risk for poor healing of the ulcer and lower limb loss.

In patients with diabetes and foot ulcers,any of the following findings decreases the probability of ulcer healing if TcPO2 < 40 mmHg, ABPI < 0.7 or a toe pressure < 30mmHg. Patients with such findings on non-invasive testing and a non-healing ulcer, rest pin or tissue loss, should be considered for vascular imaging and revascularisation

Colour Duplex Ultrasound, CT-angiography, MR-angiography, intra-arterial Digital Subtraction Angiography or CO2 Angiography can be used to obtain anatomical information and the extent of the disease, when revascularisation is being considered.

The aim of revascularisation is to restore direct flow to at least one of the foot arteries, preferably the artery that supplies the anatomical region of the wound (Angiosome Concept), with the aim of achieving a minimum toe pressure ≥ 30mmHg or a TcPO2 ≥ 40 mmHg. The revascularisation cane be done by surgical bypass or endovascular techniques.

Aorto-bi-femoral bypass, femoro-popliteal or femoro-tibial bypass are well established procedures for long arterial occlusive disease. Despite higher morbidity and healing times, these procedures are durable and have high 5-year patency rates. Use of autologous vein is recommended for infra-inguinal bypasses, whereas Dacron or PTFE is used for aorto-iliac segments. These procedures may be combined with arterial endartectomy, profundaplasty and can also be combined with endovascular techniques as a hybrid procedure. Extensive surgical bypasses are usually reserved for surgically fit patients TASC D lesions or patients with multiple failed endovascular revascularisations.

Endovascular revascularisation is usually the first line therapy to improve the blood supply to the lower extremities. TASC A, B, and most of TASC C and D lesions can be done with angioplasty with or without stents. Various techniques like subintimal angioplasty, retrograde technique, atherectomy, shock-wave lithotripsy, LASER, cryotherapy or SAFARI technique can be used to get a successful result. The judicious use of stents like Vasculo-mimmetic stents (Supera, Abbott) has changed the paradigm in treating arteries across the joints. Use of Drug Coated Balloons (DCB) has improved the long term patencies of revascularisation, especially in re-stenotic lesions. 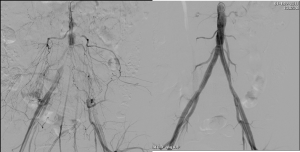 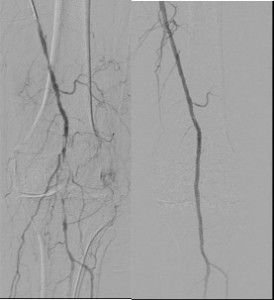 Along with surgical and endovascular revascularisation for a foot ulcer in diabetes, the patient should be treated by a multidisciplinary team as part of a comprehensive care plan. All patients with diabetes and an ischemic foot ulcer should receive aggressive cardiovascular risk management including support for cessation of smoking, treatment of hypertension and prescription of a Statin as well as low-dose Aspirin or Clopidogrel. Other medicines like Cilastazole, Pentoxyphyllin, neuro-modulators like Gabapentin, Pregabalin may also be prescribed. All patients should undergo debridement of the foot ulcer along with antibiotics for infections. Foot offloading is mandatory for neuropathic ulcers.

Post revascularisation, most studies report limb salvage rates of 80–85% and ulcer healing in > 60% at 12 months. The perioperative morbidity has been reported to be around 10-20% due to the underlying co-morbidites as well as the poor general health of the patients. The mortality rates of both surgical and endovascular revascularisation procedures in patients with diabetes and an ischemic foot ulcer are between 5-10 % in most studies, but tend to be more in surgical patient due to cardiovascular complications. The outcomes in patients with diabetes and end-stage renal disease are worse, 1-year limb salvage of < 70%, with a 5% perioperative mortality and 1-year mortality of approximately 40%. In patients with a non-limb threatening infection and signs of PAD, the blood supply to the foot should be optimized before surgical debridement to ensure that potentially viable tissue is not unnecessarily removed.

Patients with signs of PAD and foot infections are at particularly high risk for major limb amputation and life threatening sepsis, if left untreated. In one large observational study, the major and minor amputation rates after one year in these patients were 10% and 44%, respectively. In all patients with a deep-seated foot infection, priority is given for immediate drainage with removal of all necrotic tissue and starting intravenous antibiotic therapy after tissue is obtained for culture. At the same time, evaluation of the vascular status and consideration for a revascularisation procedure should be planned.

However, in case of severe infection in the ischemic foot, especially in patients with systemic signs of sepsis (e.g. hemodynamic instability), immediate amputation may be the only option. Revascularisation may be inappropriate for patients who are severely frail, have a short life expectancy, who have poor functional status or are bed-bound or those with a large volume of tissue necrosis that renders the foot functionally unsalvageable.

Any revascularisation procedure should be part of a comprehensive care plan that should also include treatment of infection, frequent debridement, biomechanical offloading, blood glucose control and treatment of co-morbidities.

Click here to know about the “Precautions to prevent Diabetic Foot”