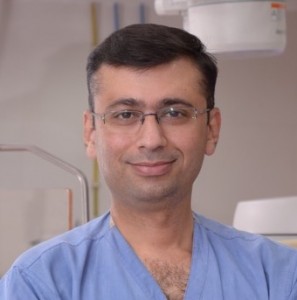 Dr Ajay Yadav graduated from RNT Medical College, Udaipur, Rajasthan in 1998 and did his post graduate surgical training from Maulana Azad Medical College (MAMC), Delhi University in 2001. After his surgical training, he completed his National Board of Examinations Peripheral Vascular Surgery Fellowship from Sir Ganga Ram Hospital, New Delhi in 2007.

He successfully completed his Higher Vascular Training and Vascular Fellowship from University Hospital Birmingham NHS Trust in 2008 and worked as Specialist Registrar in the Department of Vascular Surgery at Selly Oak Hospital, Birmingham, UK. He has been working as a Consultant in Sir Ganga Ram Hospital, New Delhi since 2009.

Dr Ajay Yadav has been the Invited Faculty at various National and International Vascular conferences. He has been part of various research projects and is the Principal Investigator for a number of Clinical Trials.

He is the First Vascular Surgeon in India to successfully perform Total Robotic Aorto-bi-femoral Bypass. He is also the First Vascular Surgeon in North India to do an On-table Fenestration for treating Complex Aortic Aneurysms. Dr Ajay Yadav has a keen interest in Endovascular Procedures and has many complex angioplasties and embolizations to his credit. His practice encompasses all aspects of open vascular, venous and endovascular surgeries.

As In-charge of Diabetic Foot Care Centre at Sir Ganga Ram Hospital, he has a keen interest in management of Diabetic Foot and its vascular complications. He has trained with Dr David Armstrong at SALSA, Arizona, USA, and his team of diabetic foot technicians and podiatrists have successfully saved thousands of patients from amputations.